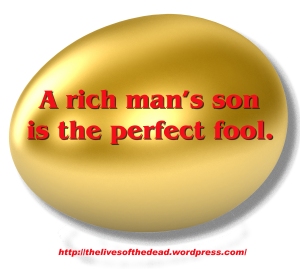 When I was young, I never met a man I didn’t want to manipulate. I was a beautiful child and grew into a beautiful young woman. My family was not at all rich but I quickly learned that I could get more out of the little I had by playing a feminine game of misdirection: Make a man think he was going to get something from me, take whatever he offered in order to win those favors, and extricate myself cleverly before I had to pay the piper.

Finally, it came time for me to marry, because I knew I could not continue this way forever. My charms would not stay fresh indefinitely. I had to find a man who would give me what I wanted without being strong enough to demand too much in return. A rich son was the perfect fool, and he kept me comfortable for a long time. I was mostly faithful to him because I never gave away my favors cheaply. I did, however, use my charm on other men to get whatever my husband couldn’t give me; these other men were social conduits who helped me gain the spotlight.

I did have children, and I loved them in my way, but mainly they were also useful as a anchor around my husband’s neck.   Once the children came, he would not, could not leave me.

Over the years, I became used to him. He wasn’t a bad man. He provided well for me and my children. He was a good father.   I didn’t hate him or take pleasure in humiliating him, as did some women – even those far more “respectable” than I.   I valued his position in the community and was always discreet so as not to shame him, either privately or publicly, although people sometimes talked. They could prove nothing, so I ignored them.

I was already old when he died. I’d long lost my beauty, and had settled in to a comfortable and relatively content life. This became possible by readjusting my lofty goals to those more realistic. My number one priority was no longer being the center of attention.   It took me a long time to get to that point, but it’s good I finally learned it. At least I won’t have walk that same path again.