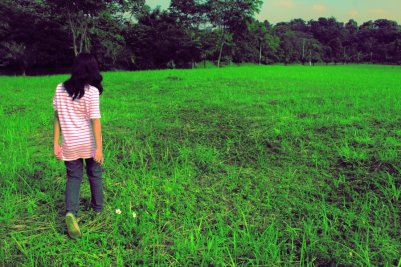 I was, by most anyone’s account, a thoroughly useless human being. I cared about nothing and no one, not even myself.  This was not because I was selfish or evil.  It was simply that nothing interested me more than superficially, fleetingly.   I felt no passion for anything or anyone.  The result of this (or perhaps the cause) was that I lacked any sense of purpose.

In my youth, I had a small circle of friends from school.  There were social protocols which confined me to a normal path, thus my problem was not so obvious, not even to myself.  If I ever noticed that I seemed to be the only one without any kind of goals or driving motivation or special interest, it didn’t bother me. I assumed that something would eventually attach itself to me to pull me in one direction or another.

After school, my friends went their separate ways, finding both happiness and disappointments in their pursuits.  Without the structure of the group, however, I just drifted, pushed along by the tide of expedience or whoever tugged most strongly at my sleeve.  I felt no loyalty — not to people, not to places, not to ideas.   I hurt and disappointed almost everyone I met in my life — parents, friends, teachers, lovers.

I was too emotionally lazy to care, to pursue meaningful relationships.  I lacked all ambition. Everything and everyone was just a place holder.

After a few years, the ennui became too tedious to bear, so I numbed myself with drugs.  I found in them an alternate reality that was more far more absorbing, more textured, and more interesting to experience than real life.  It was a world of fantastic dreams with no pressure to be or to do anything.  I fell into the habit easily.  At first, it was only an escape from nothingness, but before long it became my raison d’être.

In the beginning, I concealed my habit from my family. It wasn’t that I didn’t want to hurt or worry them.  I just didn’t want to suffer their good-hearted but feeble attempts to put me right.  As far as I was concerned, I was already on the right path. I had no need for help.

Over time, my addiction became impossible to hide. It showed on my face and in my body, and mostly in the way I lived my life.  I remained in the real world only long enough to find the means to again escape from it.

I knew such a life would kill me at a young age but that didn’t put me off of it.  I hardly cared about dying.  I’d miss no one and nothing, and no one would miss me.

Looking back, I cannot say that I could have been happy had I taken another path.  The road I traveled, even in retrospect, seems the only one possible, given who I was and how I felt (or rather, didn’t feel.)   Had I lived in a different time or place or culture, I might have been forced into a role and given an ostensible purpose. That might have but me in the box of a normal life, but given who I was at my essence, nothing would have made me happy. Any other path I might have taken would also have ended in some tragic way.  I was damaged at my core. No amount of introspection or self-awareness would have changed that.  Had I been married with a family, I would have made them all as miserable as I was. At least I spared others that.

I am sure there is a lesson here, but I still do not understand it.