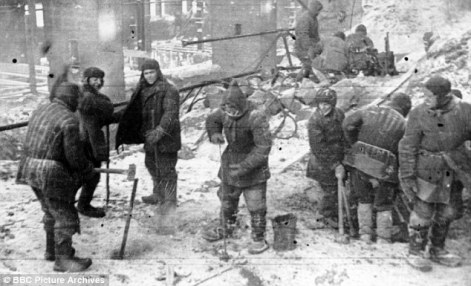 I had  lived through many a freezing winter but none of them prepared me for the killing cold of that place. It sucked the heat from every cell causing the body to shiver and give up precious energy.  It was a place which, by all reason, should have been uninhabitable by humans.

And yet,  there we were.  Sent far from home for dubious crimes against the state.  I had made a joke to the wrong person.  My off-hand remark was reported.  No trial. No words of defense.  Just a guilty verdict and a train ride to hell.

They are wrong who say hell is an inferno. My hell was a frozen wasteland.

Escape was impossible. In the winter,  nothing but blinding whiteness for a thousand miles. Even in the all-too-brief summer, when the snow bled back into the earth and the yellow moss peaked through, we were hemmed in by dense confounding forests, impassable mountains, rapid rivers rushing with melt, and mosquitoes which attacked in thick, monstrous clouds. The guards, who were not much better off than we were, barely made an effort to keep us from running.  Why waste any more of their precious energy chasing us? Where could we go?   To stay was almost surely to die, but to escape guaranteed it.

From where I am now and from where you sit reading,  the wretched conditions seem abstract,  but in that place,  in that time, they were as real a misery as any human being can suffer.

We were forced to work, sometimes on so little food and so little sleep,  we were little more than walking dead, our souls tethered to our bodies by the most tenuous of threads.  We swung our pick axes at rock and frozen ground,  barely marring the surface, yet forced to keep on. We were left to sleep a few hours,  then awakened to do it again.

We lived in huts made of wood, which did little to keep out the bitter, bone-biting wind.   We huddled in tight clusters, taking comfort in the body heat generated by others,  inured to the stench of other filthy unwashed men,  all of us decaying from the inside out.

Food was as scarce as warmth.  We suffered from all the plagues of starvation.  Our teeth fell out,  which made eating difficult, compounding our malnourishment.  A downward spiral of organ failure.

Our pleasures were few.  Some made vodka from potatoes,  or wine from anything that would ferment. We drank to forget,  but in the long term,  it made everything worse. It destroyed our health,  our resistance,  and the harmony among fellow prisoners.

Death was not mourned. Clothes, shoes, coats were immediately stripped from corpses, grabbed as additional layers for personal use.  An old professor, whose only crime had been telling the truth,  didn’t last there more than a month.  He reminded me of my grandfather. I sat beside him as he died.  His cashmere scarf was already around my own neck as his soul left his body.

Some could not wait for their natural ends. They committed suicide by escape.  They wandered out into a frozen landscape, where the snow-covered tundra was indistinguishable from the silver sky.  A colorless, disorienting,  horizonless void.  But at least they died in freedom, a choice to be admired.

I did my time of eight years.  I was 24 when I went in.  I was 124 when I came out;  sick,  half-toothless,  mostly crippled and in constant pain from a broken leg which was not attended to properly and healed badly.   There was nobody waiting for me when I returned to the world.  My situation was not much better at home. I was dead within the year  but at least I saw one more springtime.

In my final hour, I sat on a bench in a park,  so tired,  so hungry, in so much pain, knowing I wouldn’t last much longer,  But I did not mind any of that. I was at peace; content to feel the warmth of the sun on my face; to smell the living green of the grass and the budding flowers; to see the girls with their hair loose and free.

And I was free, too.

Also,  I have started a discussion group on Facebook,  for conversations about any of the concepts/issues in the posts.  Honestly, these are things in here which I don’t fully understand myself.  I would love  get your thoughts on this…even if you think this is all a bunch of hooey.