Archive for the category “voices in my head”

It’s Just the Voices In My Head… 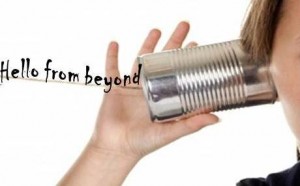 A note from me

I’ve been trying to devote more time to channeling, but for some reason,  the stories aren’t coming with the speed or ease they used to.  However,  I’ve been experiencing a strange new phenomenon.  I’ve been hearing “voices” in my head.  I can’t make out what they’re saying, exactly  — it’s as if I’m listening to conversations through a thick wall; as if people are conversing in the next hotel room.  Although the words are indistinct,  I can make out accents or know what language they are speaking other than English.  I can tell if they are arguing,  pontificating, speaking lovingly/romantically., etc.   So,  I might have a sense that it’s a Russian couple having a fight,  but I have no idea what they are saying.  Every once in a while, I might catch a word, but since I often don’t speak the language,  it means nothing to me.  This happens only when I blank my mind and go into that state where previously dead people gave me their stories.

Before any of you suggest I write down what I’m hearing, I should say that there’s nothing solid enough for me to grab on to.  If I try really hard to listen or make sense of it,  it recedes.  If I try to pin it down,  it disappears.

Sometimes, I hear fully orchestrated music (that goes back to childhood.)   I suppose if I were a musician and could transcribe what I was hearing, I could  write it down and “compose” music.  Alas, it melts away as soon as I engage my fully conscious mind,  in the same way the voices do.

I have no idea what this is about.  Maybe there’s something psychic or clairaudient about it,  or perhaps it’s just my mind playing tricks.  Or perhaps I’m just nucking futz!!!